I was sitting here playing my electric guitar, wondering just how safe it is. After all, it’s connected to an amplifier which is plugged into a wall outlet, and I’m touching metal strings. What are the odds that an electric guitar will electrocute you? Well, let’s find out!

Electric guitars are generally considered safe. As long as the guitar amplifier is modern and in good working order, there should be no issues. However, problems can arise if equipment is not grounded properly, or a performance venue has faulty wiring. In this case, it could result in anything from a mild shock, to electrocution.

In your day to day practicing at home, you most likely will not be shocked or electrocuted by your guitar. However, it can and has happened to performing musicians on stage. There are a few guidelines you can follow to prevent yourself from receiving an unfortunate electrical surprise.

When You Could Be Zapped

An electric guitar amplifier is like any other appliance in your home powered by electricity. It needs to be grounded. The guitar itself is not the problem. Unplugged, there is no electrical current running through the guitar unless there are batteries in it. (You may have a 9V battery in your guitar if it has an onboard preamplifier.)

Modern major electrical appliances have a three-pronged plug with a ground. Your electric guitar amplifier is no different. The two flat blades of the plug supply the hot and neutral components of the electrical current, and the metal prong grounds the circuit.

The purpose of the ground is to direct any buildup or surge of electricity into the ground, and not out through the amplifier. This protects you from getting shocked. Electricity will follow the path of least resistance and the ground is there to provide that path.

Unless your amplifier is a vintage amp from the 1960s or earlier, it should have a three-pronged plug with a ground. Old amps used a two-pronged non-polarized plug. A non-polarized plug is recognizable by two blades of the same size. Think of the plug on an old table lamp or electric mixer.

If your vintage amp has a non-polarized plug, you should consider having it serviced to replace the plug. If you are curious about vintage guitar amps and their circuitry, check out this post on amplifier shocks.

If you have old electrical outlets without a ground, do not cut off the ground prong on your amplifier’s plug to make it fit! You can try an adapter instead. With a simple Google search, you can find a three-prong to two-prong grounding converter for a few bucks. Note, you need to remove the screw on your outlet cover, connect the adapter, and screw it back together.

Performing musicians are at greater risk of getting shocked from improperly grounded equipment, faulty wiring within a venue, or if the equipment is not set up properly.

According to the experts, there is the possibility of electrocution if the amplifiers and on-stage equipment are connected to a different electrical circuit than the microphones. In this scenario, the microphone cables would eventually terminate at a sound mixer at the back of the venue, and the amplifiers would be plugged into a different electrical circuit onstage.

Is this where we demonstrate the Van de Graaff generator?

The electricity is going to look for the path of least resistance. Normally, this would be the path to the ground in the circuit. If all the equipment is properly grounded, and the equipment is connected to the same circuit, there should be no issue. The connection to the ground protects against any electrical buildup which would be discharged without issue through the ground.

If the equipment is connected to different circuits, there will be different levels of resistance within the pathway to the ground. This can be made worse if some equipment is not grounded–for example if the ground prong is cut-off from the plug.

In this scenario, a performer completes the circuit by touching the guitar and microphone at the same time. The human in the middle may become a more efficient pathway for electricity. The chances can be amplified (pun intended) if the guitarist has bare feet, or if the stage or environment is wet.

The best way to avoid becoming as legendary as a Spinal Tap drummer, is to make sure all the equipment you are using is connected to the same circuit.

It should be obvious, but performing on a metal stage during a lightning storm does not lead to anything good. Lightning is one hazard, and a wet stage will conduct electricity better than a dry stage. A wet concrete floor can also increase the risk, as well as going barefoot.

Periodically check your guitar and amplifier cords for damage. If there are any signs of a frayed or exposed wire, have the equipment repaired or replaced. Inspect your amplifier for signs of trouble, especially if it’s an old amp. You can test outlets with an inexpensive outlet tester. If you see any sparks when the guitar is placed near the microphone (while you are not touching the guitar strings), there is a problem. Likewise if you experience a shock when touching the microphone.

Guitarists have reported other issues such as getting mild shocks from the strings, and shocks when putting their feet on the floor while holding a guitar. This would seem to indicate a problem with equipment grounding.

Keith Richards of the Rolling Stones was shocked and rendered unconscious after his guitar touched a microphone stand at a performance in Sacramento. After the dramatic scene, he was rushed to the hospital and ultimately recovered.

Ace Frehley of Kiss was badly shocked after touching a metal railing at a performance venue in Florida. He was knocked to the ground, and the concert was delayed by 30 minutes. After recovering, he continued with the show. Talk about rock and roll. He even wrote a song about it called Shock Me.

A South Korean performer, Bae Chul-soo, from the band Song Gol Meh was caught on film becoming a conduit for electricity as he touched a microphone stand during a performance. As dramatic as the video is, thankfully, he recovered.

Unfortunately, some musicians were not as lucky and did not survive their onstage encounters with electricity. There were some notable incidents in the 70s that you can Google if you want to know more.

Guitar Elbow and Other Hazards

Setting aside the issue of electricity for a moment, other guitar safety concerns could be classified as being more of an ergonomic or lifestyle nature.

Guitar playing is a physical activity, and some playing positions can put stress on your hands and arms. The repetitive nature of playing can compound that stress. Some gentle stretches before and after playing would be a good idea.

If you are performing, you’ll have the weight of the guitar supported by one shoulder with a guitar strap. You may start to favor lighter guitars for gigs. You can read more in our article about guitar weight, and find some lighter options.

Other hazards could be a healthy obsession with your instrument and guitar playing, irritation of those around you as you endlessly practice the pentatonic scale, and middle-aged visions of “getting the band back together.”

There are worse things you can do than play guitar, so take that into consideration. Despite the scary, but arguably preventable and less common risk of a shock, playing the guitar is a safe activity. The average person practicing at home should not be concerned. Don’t let stories of spectacular incidents stop you from playing! 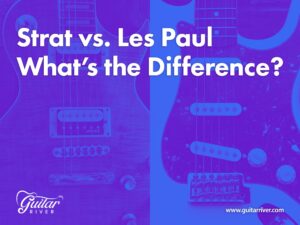