The minor pentatonic scale is a fundamental scale for both rock and blues. Aside from the major scale, this is one of the first scales that guitar players learn.

There are five pentatonic scale forms or patterns on the guitar. We will take a quick look at each scale form, and how they fit together on the guitar’s fretboard. I’ve included a downloadable PDF of the scale patterns at the end of this article.

As the name suggests, the minor pentatonic scale is a five-note scale in a minor key. “Penta,” meaning five, and “tonic,” or tone, broadly speaking.

We are not going to spend long on the theory, but instead focus on the five pentatonic scale patterns on the guitar.

If you want to learn a little more about the scale construction, music theory, and how it fits into the modes, checkout the Wikipedia article on the pentatonic scale.

One interesting observation from Wikipedia is that the standard tuning of a guitar contains the notes of an E minor pentatonic scale: E, A, D, G, B, and E.

These scale forms can be referred to by their number as well as their relation to the open chords on a guitar using the CAGED system. We will discuss the CAGED system in another article, but I do want to point out that it impacts the numbering of the scale patterns.

Depending on the guitarist or teacher you learn from, you might know the first scale pattern as either position one or three. The position refers to where the scale form is in sequence along the guitar fretboard.

For this reason, the numbering can be confusing. I’ve seen both numbering approaches used in different training materials.

For the purpose of this article, we are going to go by the standard numbering of these patterns that most guitar players are familiar with. The CAGED system is a more advanced topic we will cover later.

A note on the diagrams: The number corresponds to the finger used to play the note. The red dots are the “root” note, or the note used to determine the key for the scale.

It is important to recognize how these patterns fit together. They are linked so that the top part of one scale form is the bottom of the next scale form.

Once you learn the five positions, the next step is learning how to link them together into musical phrases.

Guitar players often get stuck in an area of the fretboard, relying on one specific scale form. It’s best to find ways to link the scale forms, and just use them to provide structure for your playing.

There are two lead patterns that can help you break out of the box. Aside from those, you will find your own riffs as you become familiar with the scale, and by studying other guitar players.

Pattern one is usually the one that most players know and learn first. It’s arguably the easiest one to play as well, though the first to fourth finger stretch may not be easy for beginners.

The root note is the first note of the scale on the low E string, making it easy to determine the key of the scale.

When you later learn the blues scale, you’ll discover this pattern has some great opportunities for bending into that blue note.

Moving on to pattern two, note how the bottom part of the scale shape is the top part of pattern one. Make a mental note of this as it is key to linking the shapes together and breaking out of the scale pattern box.

With this pattern, you may opt to use fingers one and three instead of two and four. Again, this will be more appropriate on the higher frets, and when sliding between patterns.

You’ll find some nice riffs moving between pattern one and two on the first three strings.

The third pattern of the pentatonic scale is unique in that it has elements of the open D chord shape. You’ll learn more about this with the CAGED system.

You can make use of that shape by adding some dyads to your solos (two note chords).

As you start to get experience with the scale patterns, you’ll find you can slide these dyads to create interest.

The fourth scale pattern is very similar to the first. There are differences on the second and fifth strings. This pattern is also conducive to some nice riffs, and is as comfortable to play as the first pattern.

The final pattern is symmetrical and easy to remember. You’ll find opportunities to slide back into the first position, especially starting a riff on the sixth string and moving into the fifth.

Transposing to a Major Key

To change the scale to major, move the entire pattern down so that your pinky finger is now where your first finger was. For example, an A minor pentatonic scale starts on the fifth fret with pattern one. Start the same pattern on the second fret, and you have A major pentatonic. Same pattern, major key!

Now that you have an overview of all five positions, learn each one, and how they fit together. Try creating musical phrases moving between the different shapes.

Practice with a metronome or backing track. Try not to get stuck in one particular pattern. By understanding how they fit together, you will gain a better understanding of the guitar fretboard. 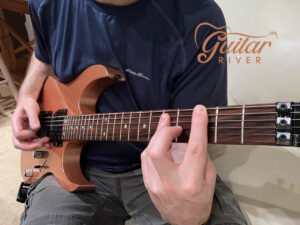 Power Chords Explained: What They Are, and How To Play